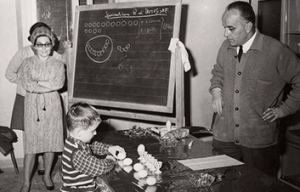 Malaguzzi graduated in Pedagogy and began his career as a primary school teacher in 1946. In 1950 he qualified as an educational psychologist and founded Reggio Emilia’s municipal Psycho-Pedagogical Medical Centre where he worked for more than twenty years.

In 1963 he began working with city administration on opening the first municipal preschools. In 1967 this initial network of schools began to take in self-managed “Asili del Popolo”, the People’s Schools founded at the end of the war, and in 1971 infant-toddler centres were also added. Malaguzzi directed this network of schools for several years with other close colleagues and defined their cultural project.

He was adviser to the Ministry of Education, director of the Zerosei and Bambini journals, and in Reggio Emilia in 1980 he founded the Nidi Infanzia National Group.

Malaguzzi also conceived the idea for the exhibitions The Eye if it Leaps Over the Wall and The Hundred Languages of Children.

Loris Malaguzzi was the untiring promoter of an innovative philosophy of education which with its theory of the hundred languages gives value to the potentials, the resources, and many intelligences of all children. 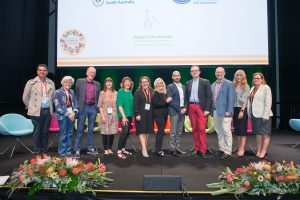 The Foundation Reggio Children – Centro Loris Malaguzzi is an international non-profit that was established in 2011 as a foundation for the promotion of the rights of children.

The Foundation believes that, “education is a project of participation and for this reason it was born as a Foundation of Participation, open to dialogue with key players at both local and global level that are interested in education, childhood and promotion of the rights of children.”

In recognition of the work the South Australian Government was undertaking to promote early childhood education the government was invited by Professor Carla Rinaldi (President) to become a member of The Foundation Reggio Children – Centro Loris Malaguzzi in 2014.

The South Australian Government, as the only government outside of Reggio Emilia to hold membership, considers this recognition of great achievement and responsibility. 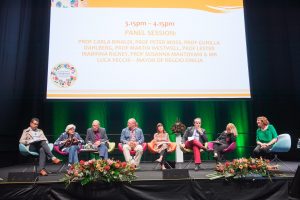 The Scientific Committee carries out, along with the Founders’ Assembly, the Board of Directors and the Foundation’s Managing Director, a consultancy, update and monitoring function with regard to the three-year Guidelines for the Foundation’s activities.

In September 2017, South Australian citizen Professor Lester-Irabinna Rigney was officially confirmed as a member of the Scientific Committee.