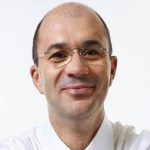 Born and raised in Reggio Emilia, Luca was an athlete, technical and executive in the world of sports association.

He graduated in Business Economics at the University of Modena and Reggio Emilia and is a chartered accountant and a statutory auditor.

He was elected for the first time in Sala Tricolore in 2004, re-elected in 2009 on the Pd list with Delrio and from 2007 to 2014 was the leader of the Democratic Party in the City Council.