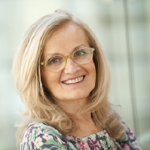 Professor Rinaldi is a world leader in education for children in the early years.

Carla is also a Professor in the Faculty of Education at the University of Modena and Reggio Emilia since 2003.

Professor Rinaldi worked side-by-side with Loris Malaguzzi, the founder of the Reggio Emilia Approach, from 1970 until his death in 1994 in the municipal infant toddler and preschool system of Reggio Emilia, where she was the first pedagogical coordinator.

Professor Rinaldi has been vice-president of the Gruppo Nazionale Nidi-Infanzia (National Early Childhood Association) and has had tenures as visiting Professor at the Webster University (St. Louis, Missouri) and at the Colorado University (Boulder, Colorado).

From 2004-2007, Carla Rinaldi was a member of the Reggio Emilia City Council. In 2007 and 2008, Carla Rinaldi was appointed as a consultant in several different Commissions of the Italian Ministry of Education. Carla Rinaldi has been a speaker at numerous seminars and conferences in Italy as well as in Europe, the United States, Australia and Asia.

In 2010 she participated in the UNESCO World Conference on Early Childhood Education and Care “Building the Wealth of Nations”, Moscow. Professor Rinaldi lectures frequently on the Reggio Emilia experience, and has published many articles, chapters, and books in Italian and English.

In 2015 she was awarded with the 2015 LEGO Prize and she became a member of Advisory Board of the LEGO Foundation in Denmark.

In 2016 she was representing the Reggio Emilia School at the Memorial Celebration of University Professor Emeritus Jerome S. Bruner organize by New York University School of Law and she participated at The Arts and Passion-Driven Learning organized by Harvard Graduate School of Education.