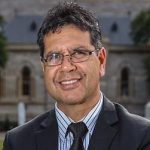 One of Australia’s most respected Aboriginal educationalists, Professor Rigney is a descendant of the Narungga, Kaurna and Ngarrindjeri peoples of South Australia. He is an expert on Aboriginal Minority Education. He is Professor of Aboriginal Education at the Centre for Research in Education at University of South Australia. He has worked in Aboriginal Education for over 20 years across various University appointments, State and Federal Government advisory boards and various other groups tasked with advancing Aboriginal and Torres Strait Education. He is best known for his theorisation of Indigenist Research Epistemologies and Aboriginal Education putting him at the forefront for schooling and language rights from 1990s to the 2000s. According to Rigney’s three principles of Indigenist epistemology – schools, teachers and researchers must build community partnerships and embed Aboriginal cultures as driving force for transformative, culturally responsive education. Many teachers and policy writers have been inspired by Rigney’s writings that promotes the idea that culturally responsive schooling is built from the experiences and abilities students bring to class. Professor Rigney has worked across the Pacific on Indigenous Education from New Zealand, Taiwan to Canada.